Summary: NASA's historic landing of a mobile rover on the surface of Mars created many newsworthy moments. Unfortunately, it also generated some embarrassing takedowns of NASA's own footage by YouTube's copyright flagging system, ContentID. 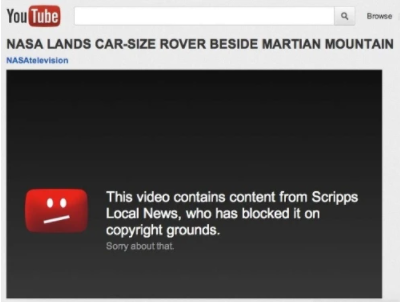 NASA uploaded its own footage of the landing -- footage that was public domain given that it was a work created by the U.S. government. US copyright law says that any work created by the US government cannot be granted a copyright. It is, instead, in the public domain, and can be used by anyone without restriction. Unfortunately, the use of this public domain footage in news broadcasts created by Scripps (owner of multiple TV stations as well as a significant ABC stakeholder) put a chain of events in motion that ultimately saw NASA's footage taken down by YouTube.

The problem was YouTube's ContentID. Once Scripps uploaded its footage, ContentID bots began crawling the site seeking matches. ContentID is structured in such a way that it believes that if content is uploaded by a private entity, that entity has a legitimate copyright over it -- even if the content is in the public domain, shareable freely by all. Shortly thereafter, NASA footage began disappearing while Scripps' broadcasts utilizing NASA footage stayed live.

This unfortunate outcome is common enough NASA reps are used to having to contact YouTube to get their own public domain uploads restored.

Questions and policy implications to consider: Resolution: While these sorts of mistaken takedowns are less frequent, they still occur. The most recent removal of NASA footage from YouTube was the result of a (likely automated) copyright claim by National Geographic, which had incorporated NASA's recordings into its own production. Given YouTube's dominant position in the video marketplace -- which has resulted in it processing thousands of hours of uploads every day -- it seems unlikely a solution that pleases every competing stakeholder will ever arrive.

With thanks to our Friends over at : Techdirt. Read the Full Story : Click here